Opening the door to new life…

This Christmas, we would like to share with you a Japanese poem “Umashimenkana”(Let Us Be Midwives !) which describes a baby’s birth in a basement in Hiroshima. The author, who is a poet, Kurihara Sadako, was a survivor of the explosion of the atomic bomb in Hiroshima in 1945.

At Christmas, God gives us his Son, the Word of life. The Mystery of Christmas reminds us of the words of Saint Paul : the whole creation and ourselves are groaning every day in one great act of giving birth to the Kingdom of God. (cf. Rom 8/22-23)

An untold story of the atomic bomb.

It was night time in the basement of a building, now in ruins.

Victims of the atomic bomb crammed into the dark room.

There wasn’t even one single candle.

The overwhelming smell of fresh blood, the stench of death,

The nauseating odour of humanity, the moaning…

And miraculously, out of all of this, came a voice: “the baby is coming!”

In this hellish place, at this very moment

A young woman had gone into labour!

In the dark, without even one single match, what could be done?

Suddenly, a raised voice said: “I am a midwife, I will deliver”.

It was the voice of a seriously injured woman, who was groaning with pain a minute before.

And so it was that in this hell a new life saw the day,

And so it was, that this midwife covered in blood died before the new day dawned.

Even if this means losing my own life. 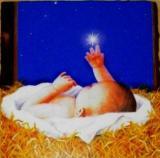 There is no greater love than to give one’s life. Happy Christmas

translated by Mary, M.Bernard and Michiko