A study trip to Fukushima with young people

As a follow-up to a retreat for young people which took place last September, we organised a study trip to Fukushima from the 10th to the 12th February.

During the retreat Monsignor Kohda who accompanied it spoke about Fukushima. Since the disaster in March 2011, the nuclear centre has caused division and destroyed the links between the inhabitants and the region. The inhabitants rise up in protest against one another in many different ways: to live among them and work to re-establish the links is the vocation of the volunteers who serve here at this time. More people, more workers for peace are needed to re-establish the link between God and the people and the people among themselves.

We prepared the trip very carefully with the help of the team of Caritas Mimamisoma through the intermediary of Sr.M.Tomoko. We travelled from Tokyo in the bus belonging to the Catholic Volunteer Centre. 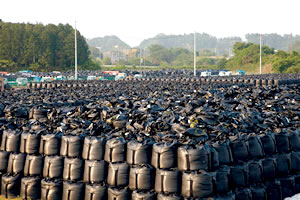 During the four hour journey we prayed and we listened to the explanation on radiation while looking at the disfigured countryside: enormous mountains of big sacks containing earth which was contaminated, neon road signs showing the level of radioactivity, guards wearing gas masks standing before the signs which said “forbidden to enter”.

As soon as we arrived, we began to listen to the stories of people who have been affected. They shared what they were doing on the 11th March 2011 at 14.46. They had a very clear memory of what it was; one young man wanted to share but he was so emotional he could do nothing but cry. We became aware that the wounds are still open and for many in a way time stopped 7 years ago.

A volunteer who has been sleeping in his van for several years also shared his experiences. With others they weeded and cleaned out the gardens of those who had been obliged to leave the areas affected by radiation and who can now return to their rehabilitated houses.

At the end of the day we shared and we prayed for the re-establishment and rehabilitation of the region.

On 3rd March we met together to reflect prayerfully with the participants. Through what each one shared it was clear that the experience was a great shock. One person even shared that it has changed her conception of life; another pointed out the great difference between what we hear from intermediaries and what we see at first hand. It is important to tell the people of Fukushima that we do not forget this tragedy, that we will never forget it and how important it is to work in solidarity.