Declaration of Peace for Humanity

Sixty six years ago to the day, an atomic bomb wiped out the city of Hiroshima. Three days later, the same terrifying ordeal struck Nagasaki.
Today, four nuclear reactors in Fukushima continue to spread radioactivity, polluting our land and our mountains, our rivers and the sea. These never-ending leaks attack every living thing, polluting also our links to the rest of the world…

Declaration of Peace for all of Humanity

The survivors of the hell that was Hiroshima are the first to have learnt this basic lesson. But their heartfelt cry for an end to this folly went unheard. Their voice was stifled by the trumpeting of words such as “nuclear dissuasion” or “the peaceful use of nuclear power”. Nonetheless the numbers of those suffering from the effects of radiation throughout the world are increasing.

In the Peace Park of Hiroshima, the memorial cenotaph carries this inscription: “Rest in peace, for this mistake will never again be made”. 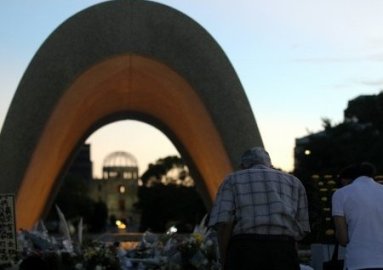 This solemn promise, written in the passive form, is flawed in that it did not show clearly who would be responsible for ensuring that the mistake would not be repeated.

This ambiguity gave the Japanese government sufficient veiled freedom to continue to use nuclear power, ostensibly in the service of its policy of “peace and prosperity”.

We are now responsible for radioactive pollution and we are profaning both land and sea.

The earth has lavished it’s blessings on us. Yet we have used the powers of science and reason to destroy these blessings far beyond what could be considered necessary.

In the name of progress, we engaged in ways that led to more and more destruction.

This Summer, in Hiroshima, we look back at the past and we can try to grasp how we got to this impasse…

Citizens of the world

we come together on this radioactive soil of Hiroshima to renew our promises.

We promise to reject all fissile material, whether destined for civil or military use.

We promise to recognise that the nuclear industry is destructive and to proclaim this to the world.

We promise to say “no” to science wherever it is used to promote violence.

We promise to say “no” to a civilisation and laws that are distorted to the detriment of the weakest among us.

We promise to come together to build a future that will protect all forms of life on earth.